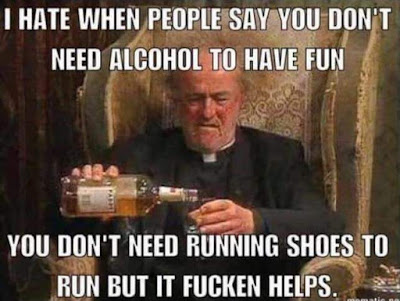 The blogging has slowed down quite a bit. I mean, let's be real--nobody, myself included, thought this blog would go six months, much less the FIFTEEN years I've kept it running. (March 11th was actually 15 years since my first post in 2005)

But I don't know that I have anything to say right now. I could tell ya the boring things going on right now, but if it bores me then it's gonna bore you, so why bother?

Got back from a work trip to Naples Florida. It went okay. The flights were pretty rough, especially the take off from BWI. Probably the roughest I've ever been on. It was windy out, so I guess he was fighting that, but the planes wings were waggling quite a bit as we climbed into the sky, and it's always very easy for me to picture one of these winds flipping the plane upside down...

Been catching up on a lot of TV. Counterpart season 2(its last) was pretty good. Umbrella Academy didn't hook me in the first episode, but got better after that. I'm almost done the season.

Watched the new season of Arrested Development. Still makes me laugh, but it's obviously not very good on the whole.

Started Love Death Robots. The first three are very strong, then it becomes hit or miss. Definitely feels like the bastard son of Heavy Metal.

Watching a fuck-ton of reality TV. The wife and I love the dumpster-fire that is Temptation Island. This one lady takes her boyfriend of five years there to test him, knowing he's cheated on her before, so it's pretty hysterical to watch him bang one of the other women while the lady's like, "Why did I bring us here?"

Love the Border Security shows on Netflix. Heavy Wrecks or something is interesting to have on when I'm working, as is the Forensic Files(which I watch for hours on end).

Did I mention I got a new camera? It's very nice. Just started doing some testing with it. Going to take some time to get used to all the options.

Am still writing "that" script, but it's pretty hard because I'm pretty sure we won't be able to shoot at night at the asylum, at least not more than maybe once. My buddy may have a lead on someplace comparable, but until I can get in there and look around, I can't write location-specific scenes.

Got out with the Malf before I went to Florida. For once I got to see him get a little too drunk--most of the time that guy downs a FUCKTON of drink and you can't tell. He was hitting the whiskey sours though, so I guess they got to him.

He's at some weird crossroads I won't go into. But one of his books is currently being pitched by a pretty good producer to Fox, and he's read the script and says it's very good. In some places, better than his book, he said.

He's leery of the script I'm writing, because he knows the cynical mindset I'm writing it to. He doesn't think I should sacrifice story just because people don't seem to respect it, but I've done it the other way and gotten nothing for it, so why not pander a bit?

As long as there are things in the script I like a lot, it's not like I'm phoning it in. I'm listening to the market and what the market respects, and I'm trying to give it what it wants. For a very small, small budget...

Will it happen? I sort of doubt it at this point, but who knows?

I live in an old house. Everything's in pretty rough shape, and not like we have the money to fix most of it.

Anyway, our bathroom--yes, we only have one, and I can't tell you how much THAT sucks--has had a shower that leaks sometimes. I'm sure it's the grout between the tiles. I'd done it a few years after we moved in, but that was 20 years ago.

I don't want to do it again. I looked into the whole bath f**ters thing(name censored so they don't spam me), but found that you can actually buy your own walls and put them up yourself. Then you only have like 4 seams, and the bottom to seal. It only costs about $400.

I was like, let's do that. Because the other bigger issue is that the water, when it leaks, runs down into my TV room/editing studio. I have too much valuable shit there to risk getting water damaged.

I call my dad to see what he thinks. He says it looks good, but that we should replace the shower handles while we're at it. I immediately think, "Fuck, this is gonna turn my one-day job into a two -day job."

In my dad's defense, the shower handles DO need replacing.  They're dogshit--a separate hot and cold, and I've had to replace them sometimes because the o-rings inside go bad frequently.

Saturday we began. I have to run outside to the front yard to cut off water to the house because the inside cutoff valve is bad, and I don't want to fuck with it. It may not close right if I open it.

Then we cut off the pipes and start trying to get this new one-handle system in. It's tough going. My dad is soldering all the joints and connections, but every time I turn the water back on we get a leak.

We spend all day Saturday trying to fix all the leaks. Nope. All day Sunday, same thing. We get MOST of them stopped, but we put a new seal on a couple that takes time to dry so we can't put the water back on. So we put up half the walls in the bathtub. That wasn't too hard.

Sunday night I run to my in-laws to shower.

So now Monday, third day, and I'm tired from getting about 4 hours of sleep per night. We start work at 9am. Nothing's leaking when I turn the water on. Great!

But then we have to put the spigot on so we can try the shower, and when we do that, the pipe up to the shower head is leaking.

My dad keeps trying to solder this one joint--the solder has to go UP, which is the issue, and we can't see the back of the pipe because it's up against the wall. Every time he does it, I have to run out, turn on the water(which is two feet in a hole, and has to be cranked with all my might), then turn it off(we're just clearing the line), then wait for him to put the front assembly back together(we can't solder with it in, because the pipes get HOT and it's made of plastic), and then I have to run back out and turn the water back on.

It keeps leaking. We do this--I shit you not--at least 10 times. I'm getting pissed.

I know, this fucking story is riveting, but I want it down so I know when it was in case I gotta come back and check.

I hold the wall while he places the drill and pulls the trigger, and before I can react the bit jumps and comes my way and PAIN. The bit hit my hand. All things considered it could be worse. It looks like this: 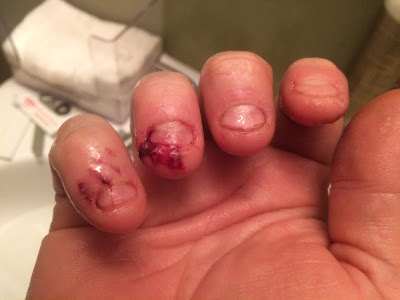 It knicked 3 of my fingers, but that 2nd one is the one that got the brunt.

Anyway, got it all done, walls up by 7pm. I still have to put sealant in the seams and the base of the walls, and put the shower curtain rod back up(it has to go higher because of these walls).

Then we'll have to replace some dry wall because I ripped a bunch out to make the job easier, after we'd fucked around with that section for an hour.

So I'm dead tired, my body hurts, I have numb toes on my left foot(will tell ya about it later).

My Name Is Kevin...and I'm A Filmmaker 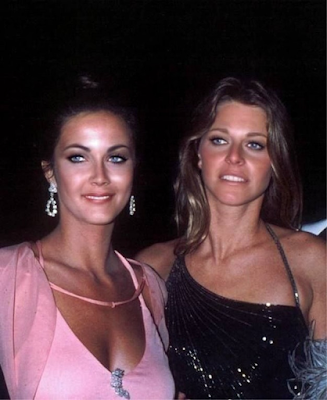 Wonder Woman and the Bionic Woman...wow...

I clearly can't stop. I've been sober -- I mean, filmmaking-free, for about 6 months.

As I've said, I still was thinking about maybe doing something else. Well, I bought a new camera. And a slider. And am looking at lenses, and some other things.

Man, this is clearly a problem, right?

I don't have the money for this stuff. Hell, I'm still in the hole around $3500 on the last film, and A-zon just lowered our payments AGAIN. (see the indie blog for that shit)
http://indyfilmmakeradvs.blogspot.com/

So anyway, work continues on the script. It's REALLY hard for me to stay minimal on story. I LOVE reveals in movies, as it typically gives me something to write toward.

But on this one I'm staying away from that stuff. This one's gonna be very light on plot with some cool kills. I've thought up some cool kills, but I have NO idea how to do them for nearly no money.

I'm also trying to figure out whether my main character is a good guy or a bad guy, deep inside. He's clearly very mercenary, but just HOW mercenary is something I have to figure.

And hey, more good news! That place I was thinking about illegally shooting at? There was a fire there last week, so there's gonna be more security now for sure. I'm thinking about maybe shooting there one or two day/nights, and seeing if I can find another location to shoot at for most of the interiors.

I wanna shoot this thing in 7 days. I'm aiming for a 75 page script, which will mean about 11 page days, which wouldn't be tough except there's a lot of FX.

Is it gonna happen? Not sure at this point.

My mother-in-law called me in a panic. I could hear a computer-voice speaking in the background.

She said that microsoft had locked her out of the computer, and there was now an 800 number to call. I told her it was BS, and that I'd be over in a second. (she only live 2 miles away)

Went over. Apparently she was on MSN's news page. She's not sure if she clicked on something, or whether this window just popped out, but either way, it was this big scary window with a repeating voice telling her that her computer was hacked, and she needed to call microsoft at the number they give.

I control-alt-deleted and shut Chrome down. It all went away. I scanned her hard drive--she has no viruses or malware on the laptop. She has ad block.

I looked it up. Apparently MSN and even Yahoo news are running ads with malware. (go ahead, google it)

Fun fun. My mother in law wants to know what web site she can go to for news that's not gonna have this issue, and I'm like, "No idea..."