A New Coat of Paint

So I updated the blog to the new format. Pretty much entirely so I could add the Search option widget to the blog.

It's for me. Sometimes I wanna go find an old post but don't want to comb through 5 years of shit.

But if it makes you feel better, I totally did it for you.
Posted by Aric Blue at 4:15 AM No comments:

If you'd like to see a song my kid learned how to play just by hearing it, go here, but I warn you--this song will be stuck in your head:
CATCHY

If you want to see what he learned it from, go HERE
Posted by Aric Blue at 4:37 PM No comments:

They are going to take over the world!

CREEPY ROBOT
Posted by Aric Blue at 1:41 AM No comments:

File these under things I didn't know existed, and have never needed. Thanks for letting me know about them, Gizmodo.

This is an oral sex snorkel.

Lot of elections in this area coming up. Tons of signs. One sign said "BATEMAN for Sheriff". Someone erased a letter and now it says BAT MAN for Sheriff. I'd vote for him.

---
Maybe I buried the lead here, but look...zombies DO exist in nature. For reals.
Zombies In Nature
----
I'm not gonna embed this--just go to Youtube and watch it. It's pretty funny.
Posted by Aric Blue at 5:28 PM No comments: 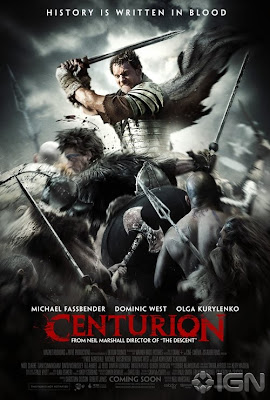 Watched Neil Marshall's new flick "Centurion"(you can pay $9.95 for it on Comcast On Demand).

It's okay. I loved Dog Soldiers and The Descent, but hated Doomsday, which was basically every good movie from the 80's crammed together into something awful. And he basically decided he wanted Snake Plissken, but he'd make her a girl.

Anyway, Centurion is an okay waste of 95 minutes. There's not much story, and far too much CGI blood. Don't get me wrong there--there's a healthy amount of actual blood and cool guts/limb flying stuff, but there really is a ton of bad CGI blood. When are filmmakers gonna realize that is may be easier, but it doesn't look GOOD?

It can't be THAT much harder. I rejoice that CGI blood was not available when they made the original Conan The Barbarian...

Also another thought hit me: This is the 2nd Neil Marshall flick in a row that features a lead hot female, very strong and badass. And Neil's girlfriend is Axelle Carolyn, a hot actress who again plays a minor role as a minor badass...how is he not getting his girlfriend the lead parts in any of these movies?

---
Spent a weekend at the beach with my wife for our 10th anniversary. Time went by fast. First night we just sat around and enjoyed the quiet with no dog and no kid.

Second night we went out to eat and to the movie. The Other Guys. Not as funny as I'd heard. I jealously eyed the guys in The Expendables line while we waited to get in the theater. This theater was weird--they didn't seat us until 10 minutes before the movie started...

Third night we got a good buzz and went to the bars, saw a pretty good band play. Burnt Sienna. We've seen them before down there.

Now back to the breakdown on the new flick. By far the toughest breakdown I've ever done, because we don't have an actual location that fits the script.

So imagine: The camera is shooting one direction on an actor--we're gonna shoot all the shots from that angle, and then when we spin the camera--nope, that's not what is supposed to be there.

The next night(or maybe even later in the week, since you don't shoot sequentially) we will have to move to another location and get all the shots from the OTHER angle, and hope they match up. This means we need meticulous script supervision--lots of notes and pics. Who is frame left and who is frame right? What were they wearing exactly?

And this doesn't even take into account some of the special effects, some of which I'm not even sure HOW to do at this point...

Honestly, if this whole project fell through right now I'd breathe a sigh of relief...

btw: You can see the teaser we shot to raise some additional cash at:
http://www.indiegogo.com/GOH
That's right, for $100 you can name your own credit. Cool, huh?
Posted by Aric Blue at 1:25 PM No comments:

And found my new favorite title for a movie. Ever.

BEST TITLE EVER
Posted by Aric Blue at 6:16 PM 1 comment:

Attended some auditions last week to look for talent. It was, like most open casting calls, 95% awful, 4% okay, and 1% decent to good.

Am working on a teaser for the movie that we haven't shot a frame of. Makes for tough work.

Shot some quick video of me in a bondage mask for this teaser. Also shot some photos, 'cause what the hell, right? Here's what I can tell you about leather bondage masks: They are HOT. I have no idea how people have sex in them, because all I did was stand while photos were taken, and when I pulled that mask off I was dripping sweat from my hair.

Watched the pilot ep and first episode of the British "Being Human". It's about a vampire, a werewolf, and a ghost. Sounds like a joke, but it's actually pretty good. Be warned though: If you watch the pilot, be prepared for cast changes. They replaced two of the three actors after the pilot(which is too bad, because I liked the original actors, but the replacements are pretty good too).

Movies on the upcoming list:
The Losers/Repo Men/Alice In Wonderland/Society
Posted by Aric Blue at 2:51 AM No comments: