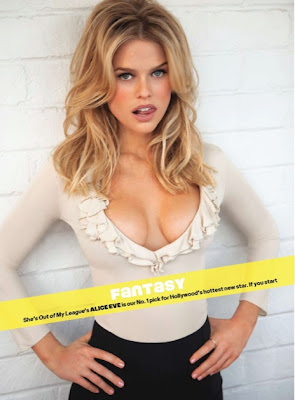 Spent some time finishing the nearly-final draft of GOH. So in the background I needed to play something I didn't really have to WATCH. Just half pay attention to.

Put on She's Out of My League. Alice Eve is the hot chick, and man is she hot.

But I'd just like to comment--they have a scene where a guy shaves his balls and there's all this hair coming down. If you have that much hair on your BALLS, you are a fucking gorilla.

It's been pretty hectic. We've been pounding away at this script, getting it into shape--I'm trying not to think about the fact that we're like 10 weeks away from shooting it and I haven't started breaking it down or anything...

Monday night we shot a nude model for some promotional pics. Since we're gonna try to raise some extra money from indiegogo, I figured I'd get some titillating pics to give people the wrong impression of the movie so they'd give us money.

It's only slightly deceptive. There will be nudity in the film, but that's not what it's all about, man. I'm an artist, don't ya know.

I'm working some photoshop magic now, but I'm not super at it. We'll see what I come up with in the next week. Then they start going live, one way or the other.

Streamed The Rock while I was working on it. You know, that's a fun movie. And Bay was nowhere near as crazy-mobile with the camera as he is now. You may not believe it, but there are actually static shots in that film.

No, seriously. The camera doesn't move on quite a few shots in that film.
Posted by Aric Blue at 2:57 AM No comments:

Never saw it, though I had imagined I did.

But I was looking for something to put on the tube while I work and saw a documentary called "Inside Deep Throat". It looked interesting, and I thought it was cool that it was NC-17.

I put it on and was immediately surprised to find it was from Universal Pictures and Imagine, produced by Brian Grazer(if you don't know who they are, well, what are you doing?)

I'm the kind of guy who is always suspicious of government, and it's stories like these that I point to when people scoff about the government stepping over the line and abusing its power.

Anyway, I recommend checking the documentary out; it's pretty good, and free for streaming over Netflix.
Posted by Aric Blue at 12:29 AM 2 comments:

Yeah, if I told you this in person, skip it. But I thought I'd get it down as a way to remember the ridiculousness.

Went to see Predators, the midnight show. My brother Mike and I. We get there early to get decent seats. The place starts filling up and gets pretty crowded.

But I'm lucking out. I have three empty seats to my right.

The trailers come on. People keep coming in. I keep my irritated face on, so nobody will come ask if anybody's sitting in the empty seats next to me.

Still lucky. Nobody does.

The movie starts. I'm starting to dig it. No build up in this flick--it starts with Adrien Brody free-falling out of the sky onto the Predator planet.

Ten minutes in, an usher comes over and says, "Are those seats taken?" I give her a look and say: "No."

She brings over a black couple. For some reason, the guy sits next to ME instead of on the other side where he'd be sitting next to a girl.

And I shit you not, the second his ass touches the seat he has pulled out his phone and starts texting somebody. In the back of my mind I think, "Maybe he's a doctor and he's relaying some last minute instructions to a nurse or something."

So I look over and read his message which says, "What's going on man?"

But then he puts it away. I'm thinking, Ok, he's done.

Nope. Within five minutes he pulls it out again and it's glowing white. People behind us SIGH loudly.

He looks at me with a look that succinctly says, "Whitey's gonna die."

But he puts his phone away. Then for the next 90 minutes he sits there with his arms crossed, a pissed look on his face. He doesn't laugh at the movie or react when anything happens. I believe he's picturing the moment he's gonna shoot me in the face once the movie ends.

It's a bit uncomfortable, but I ended up enjoying the movie. After it ended I noted he got up and walked the OTHER way out--I have heard I can be intimidating, so maybe I'm just scarier than I think.
Posted by Aric Blue at 8:31 PM 2 comments:

What lives in Maryland, looks like a baby kangaroo, but runs on two legs(not hops)? Yeah, I dunno either but I saw one tonight. It was eating something on the road and ran off as I drove near it.

I can't think of what kind of animal it could be.

Anyway, now I'm home and I see the new Day of the Dead is available to stream on Netflix. I know, I heard it was bad, but it's THERE. And it's Steve Miner! Come on, how bad could it be?

So I'm gonna stream it. Hopefully it's tolerable.
Posted by Aric Blue at 1:21 AM No comments: