ALIENS WILL KILL YOU

I just can't take him seriously anymore. In my head I see the Family Guy version of him...

So I got this cool plugin that apparently will turn SD footage into HD footage.

And I've been thinking lately about FOC2 and how I really should have a high-res master in case those hard drives go down.

I turn on the old computer--it's the one that I edited FOC1 and 2 on. No problem. I have to locate the external drives with the footage from FOC2 and switch them on.

Then I have to rename them to the letter that they were when I was editing or Premiere gets confused. Check.

But the last drive I plug in doesn't show up. It's got power. I test it on another computer. It doesn't read.

So I pull it out of its USB enclosure. I've found this to help in roughly 75% of the times my hard drive won't read. I hook it up and YES...it reads.

So now I turned it off for a while to cool it down, then got a bag of ice and put THAT in another bag of ice. I put the bag of ice on the hard drive and rebooted.

Am working on a new outline for RFBF.

Am reworking my alternate teaser for "Bounty" to include some of the critic quotes we've gotten. I hear there's another review coming down the pike this week, so I'm holding off on finishing it to see if there's anything I can pull.

Am working with Luke on what will probably be the next thing I'll direct.

Am still attempting to finish a couple of scripts that I've been bogged down on for some time.

Saw Kick Ass the other night. It was fun with some cool action, but I wouldn't say I loved it.

Now I'm watching Lake Mungo. I totally sound like a slacker...
Posted by Aric Blue at 11:10 PM No comments:

I organized my dvds tonight. Had enough of hunting and searching through shelves and NOT finding what I was looking for.

And none of them had I bought in the past year. So at some point I knew I wanted them, but not enough to watch them.

Also made my list of possible movies to watch pre-commentary on my latest flick. Me and the other two guys have previously watched The Wraith and Red Dawn. I'll present them with my list of possibilities and we'll figure it out.

I also haven't told the guys I'm thinking about making it a VIDEO commentary as well.

Stephen Colbert had a great joke at the start of his show. He started talking about Clash of the Titans.

"This movie is truly revolutionary filmmaking. They shot it in 2D...but then converted it to 3D. The amazing part...the characters stayed 1D."

Completely true. Funny, but true.
Posted by Aric Blue at 10:44 PM No comments: 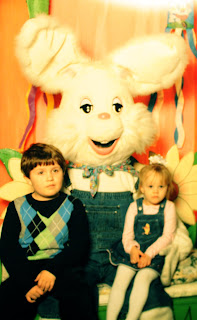 My wife took the kid and his cousin to get a picture with the Easter Bunny. She couldn't figure out why they wouldn't smile.

I'm guessing because they could sense the beast slobbering in anticipation of a nice meal.

That thing is scary.
Posted by Aric Blue at 12:09 AM No comments: