I don't know what the story is behind this. I've always liked the song, and this is a decent version. All I know is that is indeed Kirsten Dunst. Not sure if she's singing, or why.

SORRY--THE LINK WAS REMOVED...
Posted by Aric Blue at 1:48 AM No comments:

Designer Erik sent this to me a while back, but I thought I lost it in the hard drive crash.

Nope, here it is. 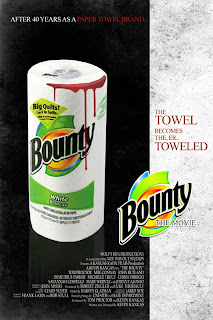 He thinks he's funny. Bastard.
Posted by Aric Blue at 2:54 AM No comments:

I've been super busy on some personal stuff lately. Haven't had much time to blog.

Feeling creatively bankrupt lately. Haven't written so much as a word in a script in over a month. Not feeling it, and that's a deadly thing for writing. You really should press on...eventually it will come back.

But you gotta START, and I'm tired and feeling fairly defeated. And as I've said before when you feel like you're writing well, you DO write well.

The opposite is also true.
Posted by Aric Blue at 11:30 PM No comments:

I've always liked this logo. It reminds me of Saturday afternoons when I'd catch flicks like the original "King Kong" and "The Thing", and too many other great movies to name. (but you can see the list HERE

But if you want to know what the morse code said, here you go. I never knew. 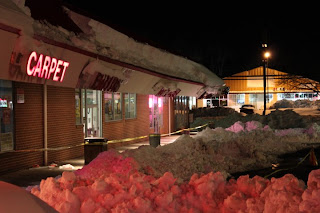 Hey, check this out. You might know where that is. Crazy.

Also, been driving around and it's nice. The roads are almost empty.

So once again, here's hoping for the zombie apocalypse. Man it's nice when no one's around. 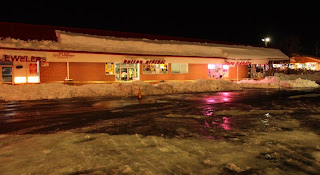 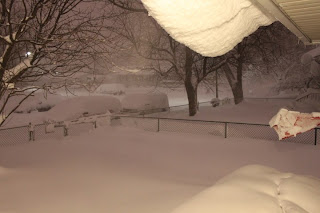 from H2 with a heaping dose of Star Trek on Blu Ray followed by The Mist.

Two excellent movies. Though there's some major grain in the dark sections of The Mist. Why can't Blu Ray do solid blacks?

Also, I went out about 10pm and drove around. Man, those roads are bad. Even in the 4WD there was a couple of moments I thought I might have to get out and dig some.

Didn't happen though. Got Slurpees again. Two nights in a row.

Got back and the wife had made cupcakes. So, I mean, besides the digging to get to the truck, the snow hasn't been horrible...
Posted by Aric Blue at 12:50 AM 2 comments:

I don't know why, but I'm about to start watching Zombie's H2. The first one was such a freakin' travesty that I can't explain to you why I'm looking at this one...call it curiousity. Could this one be worse?

But hey, I've decided to do a blow-by-blow account of it for the blog. So here ya go.

1min - Wow, Michael Myers is so chatty. And gee, he loves his mom. He's so cute. Don't you feel sorry for him? I love feeling sorry for the homicidal maniacs who kill innocent people in the movies.

4min - Hey, there's that actor from Deadwood who's the Sheriff on Sons of Anarchy. He's an amulance guy? Man, hope that part's a little beefier than it looks or I'll feel sorry for him. I like him.

5min - Laurie Strode in a hospital. Man, where does Zombie come up with this stuff? jk--I liked the original Halloween 2.

7min - bad stunt. The van completely stops when it hits a cow? Looked more like it hit a pole, which in reality is probably what happened. So much for my Deadwood buddy. Good acting on the part of the other paramedic though. I believe he was in an accident.

Why did Michael saw off the head only to drop it? Seems like a lot of work and what the fuck is he seeing his mom and a horse for? Jesus...

15min - The scene with the nurse is actually pretty cool at first. Michael Myers walking into the room feels pretty intense. But the stab over and over again while grunting in anger? Zombie's attempts to humanize Myers are really fucking him up.

What is this dumpster of bodies? Pretty sure those things don't exist in hospitals. "Gee, doctor, my brother died? Oh well, toss him in a dumpster somewhere. I'm off to the strip club."

21min The Nights in White Satin song is STILL playing? Is it a 10 minute song?

When Myers chops Buddy with the axe it reminds me of FOC2 when Shivers chops Peters from behind.

24min - and it was all a dream...wow, longest dream in history. So, a full quarter of this movie is an opening dream sequence...bodes well.

26min - and now we have some of the worst dialogue...it's like bad ad libbing. Fucking this and fucking that. Like 15 "fucking"s in 60 seconds.

Margot Kidder? Ohhhhhhh, why do people have to get old?

32min - Man, Malcolm McDowell just seems like a parody of himself nowadays.

33min - Hey, it's that WKRP guy who also played a teacher on that other TV show(imdb lookup--Howard Hesseman from Head of the Class). And he's with that chick from Heroes. And also I'm bored.

37min-Hey, it's biker chick from Feast as a reporter. This scene reminds me of the scene in FOC2 where Lynn is at the gallery.

38mm-Holy shit, now Michael Myers is walking through a cornfield toward an old barn. Damn, you know where I'm going! Shivers did the same thing in FOC2. I think Zombie really liked my movie...

He kills 2 rednecks and a girl. I won't say it, but I know you're thinking it. If that chick had gotten naked it would have been right out of FOC2. Damn, I said it.

But the grunting stabbbing is getting old.

50min - the Laurie flashes to killing Scout Taylor and being buried in a coffin...so stupid. This movie is really going off the rails. Hey, back to Margot Kidder. Maybe she'll save it...nope.

54min - Shivers--I mean, Michael Myers walking across a long corn field. At least I had the good graces to dissolve to compress time...Zombie just keeps cutting back to Myers walking...

60min--Well, he gave me some titties. But skank-titties really barely count. They're like A cups...

65min- Showing us Michael Myers face in broad daylight is just another bad decision in the long line of Zombie decisions. And making him look just like Zombie? That's not vain or egocentric at all...

68min - back to Myers walking! I wouldn't be surprised to see him stick out his thumb and hitch a ride. Hey, even serial killers need to hitchhike sometimes...

72ish--not gonna lie to you: I'm doing other stuff and only keeping half an eye on the flick.

76ish--some weird Halloween party. I caught a flash of some titties. Not enough to keep my interest. Too little, much too late, Rob.

Hey, we gonna get some more Scout nudity? That'll get my attention. And...no. Wow, you survived the first one only to get killed offscreen in the sequel. That's rude.

Did I mention that one review of this piece of shit movie on imdb is titled "Finest horror film of 2009", and they're not being sarcastic? wtf?

Oh no, the phone call came from YOUR house, Dourif! Go shoot some homeless ass!

Why oh why couldn't this movie be 90 minutes? It would be over now...

Laurie's being chased through the dark woods by the unstoppable Shivers! I mean, Michael Myers. This scene doesn't remind me of the same scene in FOC2 at all. I believe if there had been a train car there, Zombie would have had Laurie climb on top though.

And Michael Myers pulls off his mask at the end! Perfect. And an ending that makes as little sense as the rest of it.

Ok, this movie cements that Zombie's one of the worst working screenwriters getting gigs today. This could be a bigger piece of shit than the first.
Posted by Aric Blue at 3:14 AM 1 comment:

Okay, this is gonna be strange...

I was with Zig at a comedy club. We left with one of the comedians, who said he was going to a party. I vaguely remember being honest with the comedian and telling him I didn't think he was that funny. He wanted to know why I thought that.

We met up with some minor actors from The Sopranos, and we ran through the rain to a large building.

Inside it was a giant, darkened amphitheater, ringed with cushioned benches rising fifty rows into the air. We entered near the top.

A giant obelisk-like thing rose from the center. Everyone was wearing yarmulkes, and I suddenly realized it was a Jewish synagogue and someone mentioned they were having a funeral.

Ziegler--very uncharacteristic of him, mind you--said, "Why don't they just get over it?" loud enough for most people to hear.

But they were all chanting in Hebrew. I got pushed toward the obelisk, and suddenly ash stuff is coursing through my hands, and I realize I'm standing next to the deceased's mom and dad, and ash is raining down from the obelisk. "I shouldn't be here," I think. "I don't know these people."

They look at me with expressions saying the same thing. I stumble back, trying not wave off the ash remains of their son distastefully like I want to.

But the chanting gets louder, and suddenly someone pushes a glass container into my hand full of the ash. It's some kind of holy vessel--I know this but don't know how I know this--and a loud voice comes over the speaker droning in Hebrew, and I can tell I'm supposed to do something but I don't know what.

I try to mumble along with the chant--I don't know Hebrew but I figure they can't hear me anyway, and inexplicably I begin sprinkling ash around me because I think it's what I should do. But I feel like Fletch when he's trying to bullshit his way through something like, "Everything's ball bearings now".

There's a rush of air--a laser light show above us, and I see ash being whipped into the light stream and blown around and out a hole in the ceiling. It's pretty spectacular.

I manage to push the glass container into someone else's hands. I look farther down the benches and see my buddy Wex--my long-time Jewish friend, and he's got a wry smile on his face as he watches me.

I make a bee line toward him. "Wrong place, wrong time, huh?" he asks me with a smile. I think I said, "What the fuck?" but that's when it all started breaking up.

I have no idea what this means. Just figured I should get it down while it's fresh.
Posted by Aric Blue at 8:12 AM No comments: