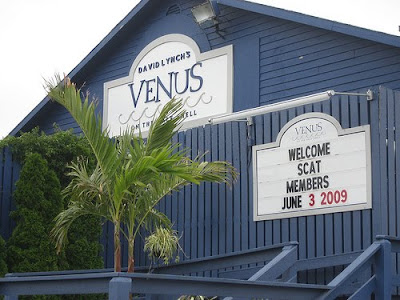 Yeah, forgot to fill in the rest of what we did. Here it is:

We went out Friday night and had dinner on the beach at a restaurant right next to David Lynch's restaurant. I kinda wanted to go into Lynch's and see if they served ear, but we didn't have time. (pic above is not one I took)

Then we saw an all-guy band named Burnt Sienna. We've seen them before; they play at Dewey all the time. Besides being good and playing good tunes, their crowd of followers is like 90% hot chicks.

There was a guy dancing in a wig and a dress. I don't know why, and I can't explain it.

The next night we went out to dinner and caught a flick. The Perfect Getaway. It's a pretty good little flick with some standout performances. Good characters. Mis-advertised. They told nobody it was written and directed by David Twohy("Pitch Black", "The Arrival").

Then we went home and watched Stepbrothers. It was actually pretty funny. Then I caught a Comedy Central show after the wife passed out.

Also got an offer on FOC2 from a small distributor. It's not a good one so I'll pass.

Finally, got Vacancy 2 on Fearnet. It's not half bad. Surprising given its very low budget, no-name pedigree.

Next day we went into Rehoboth and the wife shopped. That was pretty much it. Low-key fun but it was nice getting some time off from the kid.
Posted by Aric Blue at 12:34 AM No comments: