How can there be updates when the earth is about to be consumed by a man-created black hole? Think I'm lying?

I'm all for it though. Has to better than that horrible Disney Black Hole, right? (at least, I think it was horrible; I was like 9 when I saw it. And now that I think about it, doesn't it end just like Event Horizon?)

Anyway, pinning down locations and whatnot. As for this flick I am going to start shooting in 12 days, there is good news and bad news. I have never been more prepared, in terms of script and shot list, than I have ever been for any movie of mine. But as for money and locations and logistics(we don't even have an FX guy yet), well, this is near the worst it's ever been.

We're gonna fall short on cash, for sure. I'm trying to figure out by just how much, and what, on my already-tiny budget, we can do without.

--My lead actor seems to be doing pretty stellar considering he just got hit by a car a week ago and had surgery to stop the internal bleeding. I don't reveal much by showing you this, a picture of him inside a fake news article I created for the flick. 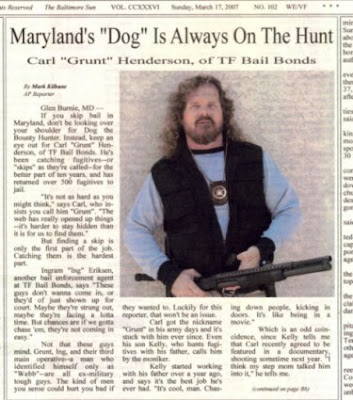 --My kid's in normal kindergarten. It's killing my schedule. But he's doing well. They got him an aid after a week. The other kids seem to like him--I kind of had fears of the kids making fun of him because, well, he's autistic and says a lot of weird stuff, but quite a few come up and say hi when they see him.

He had been taking a bag lunch, but today was pizza day and we asked him if he'd like to buy his lunch. He said, "Yumm, I love pizza!". So we asked again, did he want to buy pizza for lunch and he looked at us and said, "Yes." This sounds like no big deal, but you have no idea until you get a kid that speaks 95% TV-talk how huge it is to get direct responses.

And because Stewie sent me an email demanding more pics of my kid, here's one for you bud! Taken at St. Augustine beach. 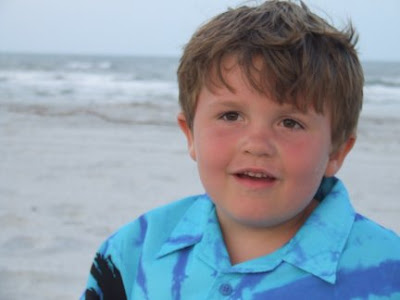 Went to Florida on a family vacation. Had mostly good weather. Only swam in the ocean once, but went to the pool quite a few times. Going to the ocean is too much hassle, as you end up chasing the kid all day long as he tries to run into said ocean because he has no fear.

Got back after the 13 hour drive. I had been getting sick the last day in Florida, and now it's hitting me hard. Hacking cough. Love it.

Get a phone call from my lead actor. He was walking out of a gas station over the weekend, and some guy fell asleep at the wheel and hit him with his car. Yeah, you read that correctly.

My guy's a stuntman too, so he tried to do the stunt hit, but he said he saw the car too late, and really got plowed. They wanted to take him to the hospital, but he said he was fine.

The next morning he woke up and was swollen all over like he was pregnant, so they went to the hospital to find out he was having internal bleeding. They performed surgery. He's in the hospital right now.

Did I mention we're shooting in 3 weeks? And his part is pretty physically-intensive.

I just can't decide whether to shoot myself in the head, or take my frustration out on the general public...
Posted by Aric Blue at 2:36 PM No comments:

Nothing on and I'm working, so I flipped on the MTV music awards. I've heard of this group called The Jonas Brothers, but never seen them or heard their music.

They played a song on the show, and I'm struck by just how dorky and plain they are. Like Hansen was when they came out. Except these guys don't even seem to have the harmony those dorks did.

I'm also struck by how cheap the award show looks this year. Normally I think it's at the Kodak theater or something. This year it looks like it was held in some auditorium, and the guests are seated in plastic chairs. Also, the host is horrible. (he's some British comedian guy who played an okay part in Forgetting Sarah Marshall)

Also, first day of the NFL. Kind of nice, except I missed most of it. Got to see my team lose in the last 15 seconds, which is always fun. And my fantasy football team got crushed because Tom Brady got hurt.

So all in all...whatever. Back to work on the shot list. It keeps getting revised every time I actually see the location we've got to shoot on.
Posted by Aric Blue at 9:02 PM No comments:

That other blog I kept for a while has a couple new entries. Check it out if you remember where it was.

Also, every once in a while there's something that makes me laugh. This is it for this week:

FUNNY
Posted by Aric Blue at 2:27 AM No comments:

Wow, such an alien feeling all of a sudden.

We had pretty much the final audition on Sunday. I had one guy coming in that I was calling my Great Black Hope. A guy I'd seen a local flick who was decent. Just not sure whether he could fit the part.

He came in and was good. We chatted afterward, and it turns out he's ex-military. Exactly what I was looking for. He's not as built as the character I wrote, but close enough to forgive.

We probably lost the other great actor I was telling you about. Somehow he got it into his head that the movie was a union shoot, and he's that horrible guild you've heard about that rhymes with BAG. He's cool with everything I could pay him, he just doesn't want to go behind the guild's back. He has something called principles. I'm not familiar with the term.

So we'll go with my second choice if our last-ditch effort fails.

I am SO prepared for this flick it's insane. I've gone over the breakdowns 100 times, making plans behind plans behind backup plans. The only real snafu will be if we get arrested or killed, both distinct possibilities.

Frankly, I would rather be killed than arrested at this point, because if I get killed at least I won't feel bad about not being able to finish the movie.

Still a lot of details to iron out. Locations to be found. Props to be gotten/constructed. An FX guy to come work for pretty cheap.