No, not the Abba song. My web site has apparently but under hacker attack since last week. They're inserting some sort of code that make it not load--it tries to refer you to other web pages.

I don't know why they'd bother. I don't get THAT many hits. But it's pretty freakin' annoying, having to go in and change all my passwords and take out the file they kept inserting.

Really, what kind of time do these people have on their hands?
Posted by Aric Blue at 8:44 PM No comments:

Blast From The Past 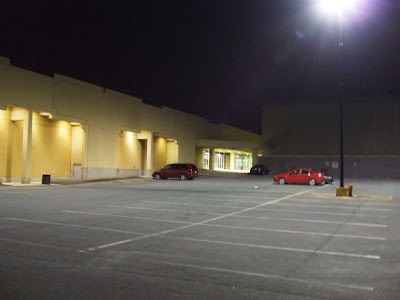 So there's a local movie playing a couple of nights at a theater near me. It's a Western. I'm still looking for decent actors for my flick, and one of the actors already IN my flick says he's going, so I decide to go.

I hear it's at Westview Theatres and my first thought is--"Hey, I shot HH at a theater in Westview, but they tore that theater down."

I drive up there. Turns out it's the EXACT theater. Apparently it wasn't torn down, it was just bought my an indy theater chain.

I park around back where Aric stalked the projectionist(I took this picture today), and the memory of it all is VERY overwhelming. I haven't been up there in about 10 years.

I meet up with Neil, an actor I wrote the part for, and we go inside and watch the flick. IN THE EXACT AUDITORIUM Aric kills all those movie-goers. It was weird to say the least.

Good news--one actor in the film is particularly strong, and it turns out Neil knows him, and he was sitting right in front of us during the screening. He said hi to Neil after the showing, and I was startled to find out he's nothing like the character he played in the movie--which was a big sign of how good an actor he was, that I actually expected him to be somewhat like his character.

I think he could play one of the main roles I've been having a hard time casting. I'm gonna set up a time to audition him.
Posted by Aric Blue at 10:08 PM 1 comment:

If You Can't Say Something Nice...

Yeah, that's pretty much why I haven't posted anything in a while. I figured you wouldn't want to hear me bitching about more shit, at least, not bitching if I wasn't going to be entertaining about it.

The battle-to-shoot-the-cheapest-movie-I've-ever-shot continues. I wish that added up to a cool acronym so I could just say it whenever I refer to it. Nope. Nothing's easy with this thing.

Our first casting call was a disaster. Smallest showing I've ever had, No A.C. at the casting studio, no phone, it was hard to find, blah blah. Only a couple of decent prospects.

Only good news is that I borrowed a rig for a test from someone who worked on my last movie, and after testing it the guy asked if I wanted him to come work on the flick. I told him I couldn't offer him much, but he was cool with it.

So he's bringing his toys, and we'll be shooting the whole flick in hi-def. That's a plus. (also a minus, as I'll have to get a new computer to edit it)
Posted by Aric Blue at 8:54 PM No comments: 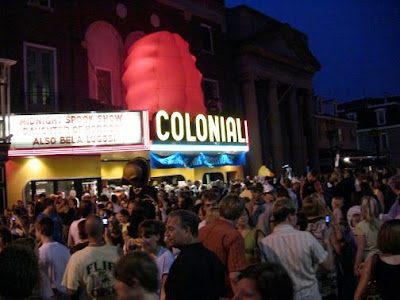 This past weekend I took my dad to B L O B ** F E S T(I put it this way to avoid search engines).

Apparently there's this town that every year has a celebration of that film(the old classic with Steve McQueen). The town was one of the main locations the film was shot in, and the theater that is attacked in the film still shows movies there. (It's now historic)

They show the movie The B L O B and they feature a re-enactment of everybody running out of the theater like they did in the film. It was pretty crazy--I'd say around 5000 people were there. (the pic above shows the aftermath of the running, and that's an inflatable B L O B up there glowing red)

My dad had told me a story one time about how he went to see the film when he was twelve with his sister and her girlfriend, and he thought it was one of the scariest movies he ever saw. So I thought he might think it kind of cool to watch the movie in the actual theater, especially since it was only about 2 hours away.

It was fun. The town and the people were all incredibly friendly. For $7 you got a double feature--The B L O B and the Creature From The Black Lagoon(in 3D no less!).

My dad kind of thought the whole thing was strange, and I got the impression he humored me. Like, "Well, my kid thinks I'm enjoying this, so I better act like it."

That's where I was. Got back in time to do some tests for the new flick with Zig and the new Exec Producer John. Got a lot of work to do, and we'll be filming in less than 3 months...
Posted by Aric Blue at 2:40 AM No comments:

Not In A Hospital...

My wife comes back from the beach this past weekend where she hung out with the family, and she says to me, "I don't want to die in a hospital."

I'm naturally confused. "Have a nice time at the beach?" I ask.

Basically, her aunt has been dying the past two months. In and out of the hospital. She's old, in bad shape. She got out of the hospital and made the trip down to the beach, and the next morning they found her unconscious on the bed, blood leaking out of her nose.

They thought it was a stroke, but it was something else relatively minor. (something about blood sugar and insulin or who knows)

But my wife has visited the aunt a number of times over the past month, so this hospital thing is on her mind. So she tells me she doesn't care if I wheel her out of the hospital and let her die in a field next to it, as long as it's not the hospital.

Then she tells me, "I told your mom so I know she won't let me die in the hospital." I act offended. She says, "I can just see you standing there while I'm dying saying, 'She'll be dead in two minutes, she won't even know if we really took her outside or not'".

She doesn't even know me...

I told her I wouldn't even be in the room while she was dying...I'd be outside hitting on nurses, looking for my second wife...
Posted by Aric Blue at 6:15 PM 1 comment: