Today(Thursday)--I'm going up early and meeting Tom Proctor, one of the actors. We're going to try to loop his dialogue in the hotel room. Should be interesting to see if it works.

Anyway, the panel is Friday at 2:00pm. (new details HERE)

I fully expect a two-person audience. Crickets chirping in the background also. 2:00pm on the first day is not exactly a great time.

But hey, you know about beggars and choosers, right?

I'll get ya some pictures maybe. Something interesting hopefully.
Posted by Aric Blue at 11:04 PM No comments:

I got wind on Thursday night that some little movie house in Philadelphia was showing a double feature of Fred Dekker movies--"Night of The Creeps" and "The Monster Squad". In 35mm glory, and keep in mind that neither of these movies is available on DVD.

"Night of the Creeps" is one of my all-time favorite horror flicks--it's incredibly witty and well-directed, and features Tom Atkins' best performance ever. I have owned more bootlegs copies of this than I care to count, and if they ever actually release it, I will buy that too.

"The Monster Squad" is a movie I can't remember. Maybe I saw it. Maybe I didn't. I hear good things about it. It's actually just about the earliest thing Shane "Lethal Weapon" Black ever wrote.

So I really wanted to go. Except my wife's cousin was getting married. I tried and tried to get out of it--my sister got married a while back and I managed to not attend that.

But my parents are away on a cruise, so we're minus a babysitter. Then I'm going away next weekend for the Fangoria thing. In the end I went to the wedding. At least it was casual.

Now I'm bummed. I missed it. Probably a once-in-a-lifetime chance to see Creeps in 35mm.
Posted by Aric Blue at 2:56 PM 5 comments:

It's a funny thing...I drive around a lot having conversations with myself. If that makes me crazy it's the least of my problems.

But I'm always thinking about stuff, and a lot of times I stumble on something that makes me say to myself: That'd make a good blog.

Then when I get to my computer because I haven't updated the blog in a few days...nada. My mind is blank.

So I figured I'd just post about that.
Posted by Aric Blue at 6:15 PM 4 comments:

I told some of you about. This is the funniest thing I've seen--it's genius advertising. Watch the intro clip, then put your mouse on Main Menu, click on Basics. Then wait--don't click on anything right away.

After he says some stuff to you, feel free to watch the various hysterical clips.

Editing. I'm in the middle of about the twentieth pass through FOC2, still trimming, still examining every line for its necessity(or lack).

But really, this post isn't about FOC2. (I can hear the collective masses clapping)

It's about editing. There's something I learned on my first film, HH. I edited that movie a total of three times. I mean, from top to bottom. I had the movie complete on one hard drive and lost it, so I had to restart it from scratch.

Then it happened again--I know, I know: If I had money for a backup I'd have gotten one. So I edited the movie AGAIN. And what I found out is that the film got better every time I redid it.

So as I work on FOC2, it's great to simply save a scene, then start over and do it different and see which one works best. It's easy, it's non-destructive, and it gives you the best of all worlds.

But it gets me thinking...can you believe what they had to do in the old days?(see: Fifteen Years Ago)

They had to take their film, and cut and splice it. Physically take a razor and slice through their film, then either tape or melt the pieces together to form the new edit. And if they wanted to cut out one frame--they had to PHYSICALLY CUT it and re-splice the whole thing back. Imagine doing that and going: "No, I liked it better the other way", and then putting that ONE FRAME back in.

Think about that. I'm old enough that they were still teaching that brand of editing when I was in film school. We had the guillotine splicers and flatbeds, the projectors and literally thousands of pieces of film. You'd just tape them up all over the place and try to keep track. And that was just for a student short.

But look at Jaws, as rock-solid a piece of editing as you'll ever see. Imagine them running around with ten or fifteen frames, splicing, splicing, attaching. Trimming it until it's as tight as can be. And doing that with over a hundred thousand feet of film!

I look back and think: You have GOT to be kidding me. Those people deserve a standing O--anyone who's ever had to edit the old fashioned way, my hat's off to you.
Posted by Aric Blue at 12:37 PM 1 comment:

Which I accidentally saw from this myspace page, where you can hear this band's new album free before it comes out. I think it's the hidden gay man in me, but I've always liked the stuff these guy do--like old Elton John meets Erasure.
Posted by Aric Blue at 12:11 PM No comments:

For the Fango panel can be seen HERE.

If you go, please feel free to come up and introduce yourself to me. Should be fun.
Posted by Aric Blue at 1:34 PM No comments: 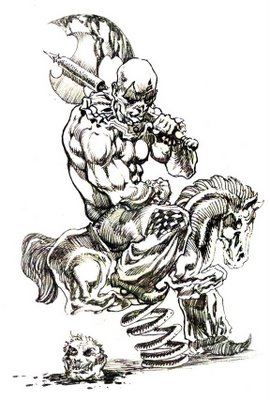 Check it out--I can't speak too much about it, but it's a sketch my buddy Tim "Faust" Vigil did for me. I can only say that it's a possible cover for a possible FOC comic book.

I've just been invited to be a guest at Fango's Weekend of Horrors at the end of the month. I guess my picture will be up there sometime next week.

The very cool thing is that my 2nd wife(I'm on my 1st right now) will be there--Charisma Carpenter(of "Buffy", "Angle", "Veronica Mars", and oh yeah, Playboy). So this will be my first chance to charm her.

But seriously. There will be a special FOC2 panel with some of the cast/crew including Mark Lassise, Tom Proctor, Adam Ciesielski and Robert Ziegler. I'll premiere footage from FOC2 with a slideshow of pictures, and I think we'll even give out an actual prop head used in the film.

Stolen from someone a while back, but I just got around to filling it out.

ONE (1) earliest film-related memory:
Grease - My mom took my brother and I to the Crofton movie theater(it's gone now), and I gotta tell ya, we loved that movie. Hell, I still do. And I'll give you guys a pre-emptive Eff-You to your response.

TWO (2) favorite lines from movies:
From one of my all time favorites, Aliens: The setup line is Ripley saying approximately: "This little girl survived longer than that with no weapons and no training." and the favorite line is Hudson's "Why don't we put her in charge?" But come one, every line Hudson has in that movie is great.

THREE (3) jobs you’d do if you could not work in the “biz”:
Work in a movie theater, creating videogames, serial killer


THREE (3) book authors you like:
Lee Child is God. John Sandford is incredibly fast and addictive. Greg Hurwitz is a new interest of mine.

TWO (2) movies you’d like to remake or properties you’d like to adapt:
Battle Royale and Lifeboat(Not that I think I could do better than Hitchcock, but so many people haven't been exposed to it that I'd love to bring it to more people).

ONE (1) screenwriter you think is underrated:
Joss Whedon--Yeah, he's got a big following, but I'm not sure any of them have actually READ one of his screenplays. I read his original script for Buffy(the movie) a LOOOONG time before it came out, and you could immediately tell this guy was a fresh voice. He makes it look effortless, the way he introduces memorable characters and gets you turning pages. (from Buffy to Angel to Firefly)
Posted by Aric Blue at 5:11 PM 2 comments: